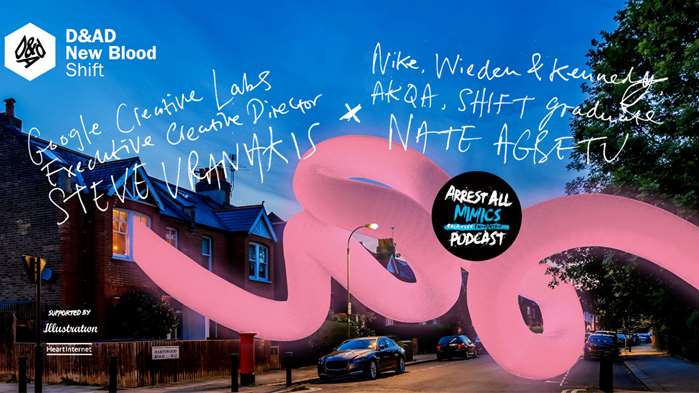 Last year, D&AD New Blood's SHIFT night school program was featured on the podcast. On the night before the 2017 application deadline, Nate Agbetu was alerted to this by a friend, a listener of the show who felt Nate's enterprising and creativity may suit such an initiative. He applied, made the program and has since gone onto exciting new beginnings with Wieden & Kennedy and Nike in various roles. I'm joined by Nate to share the story, alongside current D&AD president, Steve Vranakis, Executive Creative Director of Google Creative Lab, representing different levels of industry experience. I sit in the middle and try to keep up with two fascinating people. Join us as we discuss many aspects of creativity, energy, raw talent and upbringing with some hilarious tales of youthful misbehaviour, incredible young innovation and SHIFT 2018, which is now open for applications.

Be a part of the conversation @arrestallmimics on social media now!