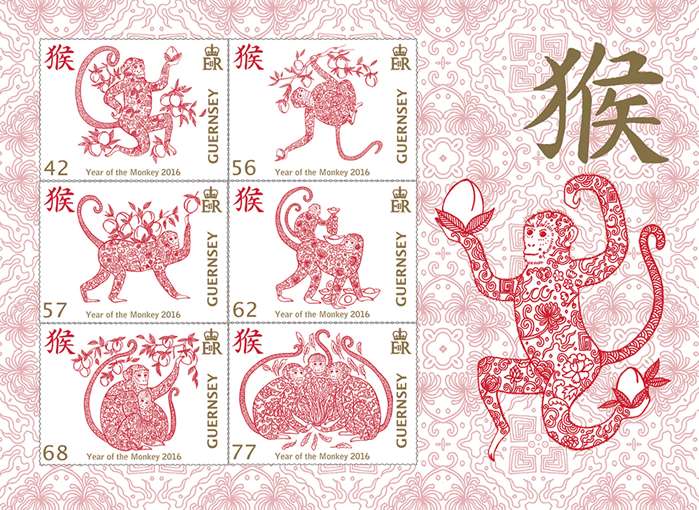 Year of the Monkey

Drawing upon her Chinese heritage, Chrissy has designed a collection of Year of the Monkey stamps as part of Guernsey Post's series to mark the Chinese Spring Festival, also known as Lunar Chinese New Year. Chrissy has previously worked on Year of the Horse and Year of the Goat stamps for the company who pride themselves on their unusual and innovative designs. Chrissy says "A key focus of the six stamps is monkeys with peaches, which symbolise longevity. Peaches are a common feature of Chinese imagery and are associated with the most famous monkey, the legendary Sun Wukong, from the classic epic Chinese novel Journey to the West, who is said to have stolen the peaches of immortality of the Jade Emperor’s sacred garden. The presentation pack gave me scope to create a larger scene and really highlight the monkeys’ charisma and show their playful characters. There are eight monkeys playing in a pine tree; the number eight is auspicious in Chinese culture because it sounds like the Chinese word for wealth and prosperity, whilst the pine tree symbolises a person who will enjoy lifelong wealth and longevity. The monkeys are holding peaches and balancing them on their heads. For the First Day Cover illustration, I took inspiration from Chinese ceramics and plates for the floral Chinese pattern on the body of the monkey, which is seen in a leaping pose holding peaches. Similarly, the monkey on the Souvenir Sheet is in an active, moving pose whilst carrying peaches. The pattern on the monkey’s body is a Chinese floral design with flames to represent 2016's fire monkey." See the collection here.