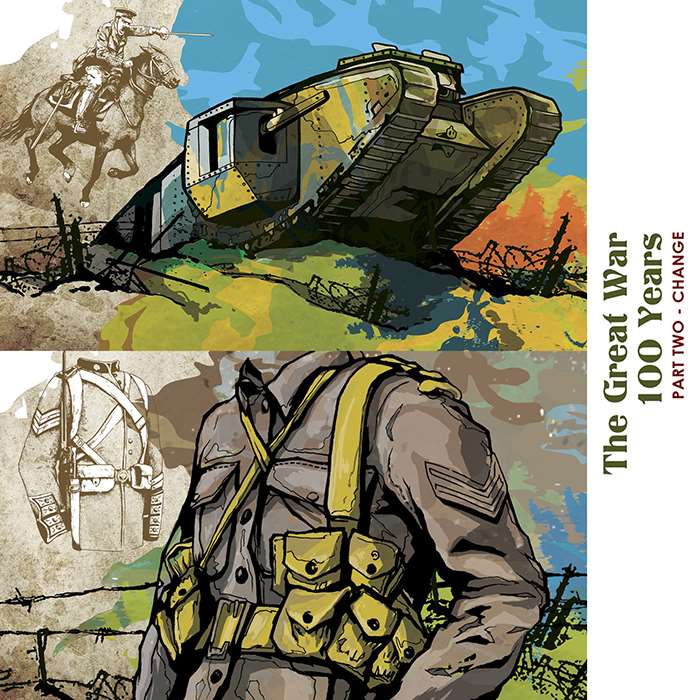 'The Great War - 100 Years' is a set of stamps illustrated by Chris Ede for Jersey Post.

'The Great War - 100 Years' is a set of stamps illustrated by Chris Ede for Jersey Post.

Chris has produced some bold and graphic images, mixed with solid lines and fluid textures for the set which is the second in Jersey Post's series commemorating the events of World War I. The stamps feature the development of mechanisation, communication, camouflage and deception, uniform, observation and the tactics of war. The Miniature Sheet features Jerseyman. Flt Lt Charles Stanley Mossop DSC who, whilst operating off the French coast, became the first man to sink an enemy submarine from the air, an action for which he was awarded the Distinguished Service Cross.

"We first worked with Chris to illustrate our 2014 William Shakespeare issue where he researched the author and produced a striking contemporary set of conceptual illustrations to represent several of the Bard's works, which helped to make a memorable issue. Later, when looking for an artist to illustrate the potentially complex issue of change during The Great War, we chose Chris due to his ability to look beneath the surface of the subject. This he did by producing striking illustrations, creating a visual narrative by incorporating a mix of accurate detail and strikingly layered backgrounds. The range of illustrations united not only the set of stamps themselves but also a range of associated products, First Day Covers packs and sheets. Chris is great to work with, happily taking on board research and art direction where required, whilst bringing his own inimitable style to the party."