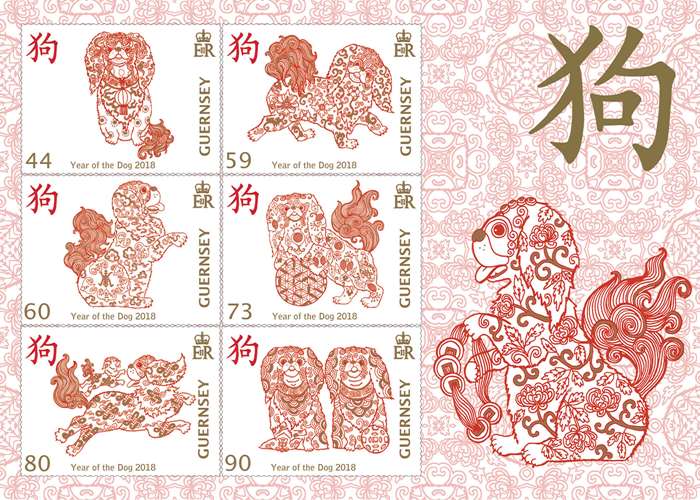 The Year of the Dog

This Friday's Lunar New Year is celebrated with a series of dog stamps released by Guernsey Post. These dogs are China’s famous Pekingese 'lion dogs' which were specifically bred to resemble the lions revered in Buddhism. Chrissy explains, "Emperors were fond of the Pekingese dog so were commonly used as motifs on snuff bottles in the late Qing Dynasty. The whole collection takes inspiration from the Fu (Foo) Dogs which are actually lion statues commonly used as lucky Feng Shui ornaments and statues, which can be seen placed at entrances of temples, Chinese Imperial palaces, Imperial tombs, government offices and wealthy homes. They are seen as guardians that keep away negative energy and are also symbols of power and protection. Each Pekingese dog has been designed with a pattern of scrolls on the head, scroll style tails and large paws to resemble the Fu Lion Dog statues."

The Sitting Pekingese Lion Dog (44p stamp) wears a Chinese lantern design necklace inspired by those worn by the Fu Dogs, whilst the Skipping Pekingese Dog (59p) has a floral rose pattern to its body, which is referred to as the Familie Rose longevity pattern inspired by ancient Chinese ceramics, vases, plates, ginger jars and tea pots.

The Loyal Pekingese Lion Dog (60p) features a bat pattern to its body that represents good luck and fortune, whilst the Chinese symbol in the middle of the five bat design represents longevity; the Pekingese Lion Dog with the Ball (73p) takes its inspiration from the Yang Fu Lion Dog statues; and, the Mother Dog & Pup (50p) body designs feature an infinite knot pattern commonly seen on Chinese New Year lanterns to symbolise longevity, happiness and prosperity.

Inspired by the Fu guardian dogs, The Fortune Guardian Dogs stamp (90p) reflects the importance that the male and female statues should be displayed together for complete protection. The female Pekingese dog sits on the left side and represents compassion and support, whilst Male Fu dogs are seen with the ball under their paw and sit on the right side of a building.

Bridget Yabsley, head of philatelic at Guernsey Post said: – “These striking stamps feature a rich colour pallet and intricate designs.  The use of red symbolises good fortune and joy and is often used in celebrations, whilst gold represents wealth, prosperity and happiness.”