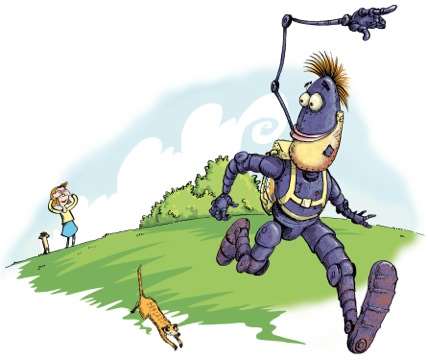 Sholto Walker works with Langland Advertising on an information campaign for Cerebral Palsy.

The client has launched a European and US study into a new drug for CP, targeted at children and parents living with the condition. Sholto says "The brief was to create a character, (much as I did with a previous Langland commission which gave us the furry red monster as a metaphor for haemophilia), to represent the muscular effects of cerebral palsy. As before, he is intended to be the alter-ego and friend of a young child who suffers with the condition, with all the symptoms appearing in him, while the child (Clara) manages them." There were several hundred children involved in the research, Sholto's work included four comics which were used as a strip cartoon to help the kids understand how the drug worked. There was also a soft toy produced - based on the robot character as well as a watch and a number of short story scenarios. Sholto has communicated the condition in an accessible way, making the characters friendly and approachable, a triumph!