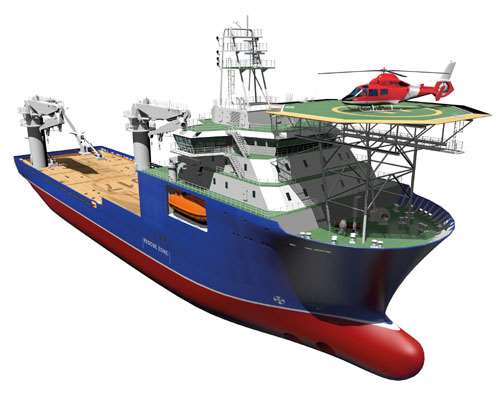 Cecon pride - one of the world's most technically advanced offshore vessels

Chantier Davie is the oldest shipyard in Canada, and last year they approached Ian to draw and animate an aerial view of the facility for use on their website and in editorial. Ian says "I was naturally interested since I love ships, particularly offshore working vessels, they are such giant, robust and technical machines, self-contained for demanding work in some of the world's harshest environments. As the job progressed it was clear that other illustrations would be required, they were kind enough to fly me over to Canada last month and I was able to gather the reference I needed to embark on the ongoing production and tour Davie facility at Lévis, across the river from Quebec city". Being on site was a treat for Ian, though having to brave a minus 30 wind-chill and a frozen St Lawrence was a challenge. The reward however was "a dream job for a charming and enthusiastic client".  Watch the animation...