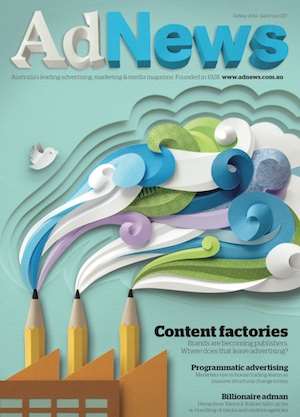 The article was on the topic of 'brand content factories' and Gail has created a visual delight using three pencils to form the chimneys of the factory from which the cloud of smoke billows across the page. She says "By using pattern and colours inspired by well-known apps, each wisp of smoke has its own identity and character. What was important to me was ensuring that the image looked positive and clean and had no connotations of pollution...I supplied the final artwork with a series of options on the typography - to speed up the process of waiting for approvals on whether or not a paper cut title and masthead would be acceptable. I was really pleased that in the final print, the masthead is in one of the 3D paper sculpture options I supplied, so it works cohesively with the imagery."