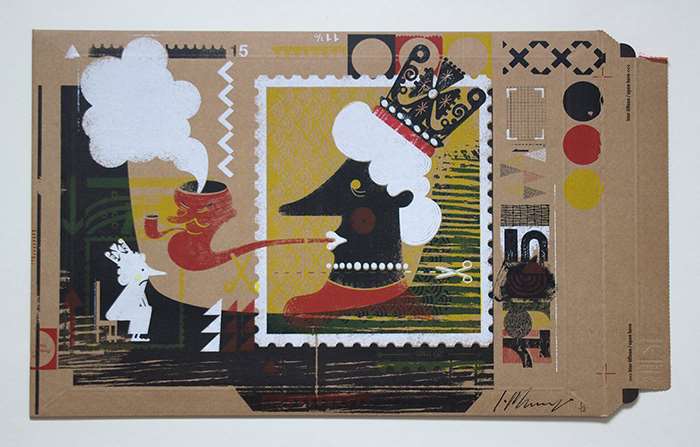 Ian Murray joins other artists to celebrate 175 years of the postage stamp in a touring exhibition organised by Neil Hadfield - the course leader at Hereford College of Arts.

fresh off the press

Ian Murray joins other artists to celebrate 175 years of the postage stamp in a touring exhibition organised by Neil Hadfield - the course leader at Hereford College of Arts.

The brief was to submit a piece of postal art in response to any aspect of the history of the postage stamp in the UK for the 'Pushing the Envelope' exhibition. Ian's piece entitled 'Tony and Liz (off with her head)' is explained below -

"In 1965 the then post master general Tony Benn changed the criteria for what could appear on postage stamps. Before this, commemorative stamps had to feature a large representation of the monarch’s head, which dominated the design taking up to 75% of the available space. Designer/ illustrator David Gentleman, wrote to Benn suggesting alternative stamp designs, also proposing that the queens image be replaced by another symbol, such as a crown or the words or "United Kingdom”. Instead a much reduced silhouette of The Queen was used and this has been the standard ever since.

During this time I was still only a twinkle in my mother and father’s eyes, but during the turbulent political years of the 1970s and 1980s, the pipe smoking socialist Tony Benn was a poster boy in our house. I marvelled at his eloquence, my dad, Albert, even taking me to see him speak at a smoke filled trade union meeting in the 1980s. During this same period I was studying English Literature at school and was attracted and intrigued by the bold, direct, wood engravings of the New Penguin Shakespeare series covers. It was only some years later at art college in London that I was to discover this was the magical work of David Gentleman.

When researching the history of the postage stamp to produce an image for this exhibition, I was thrilled to discover these small personal connections which stirred such strong memories, and for me at least inform the story behind the stamp. This image is for those 3 principled men -  Tony Benn, David Gentleman and Albert Murray who have all informed, inspired and enriched me."