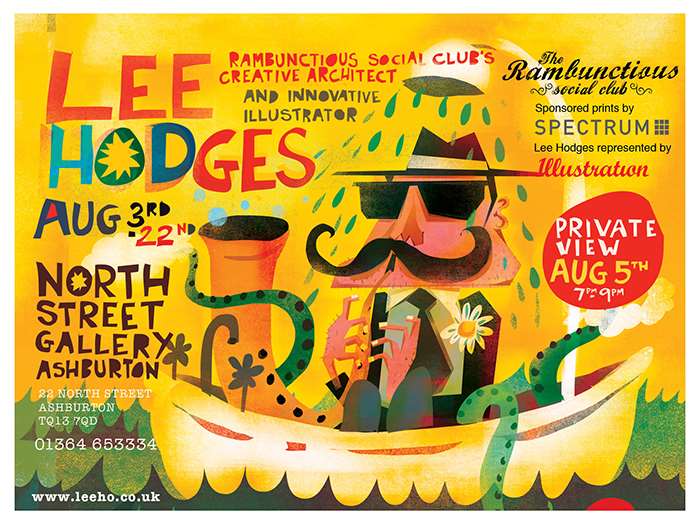 above - Lee's prints hot off the press

From next week, Lee Hodges will be showing his spectacular prints at North Street Gallery in Ashburton.

The exclusive giclee prints range from gig posters to album covers and will be exhibited from August 3rd through to August 22nd at the quaint space in Devon. Lee has teamed up with Spectrum Photographic in producing some fantastic quality prints which will be on sale - enjoy a glass of wine and some rambunctious music at the private view on 5th August from 7-9pm!

"Lee Hodges comes from deepest, darkest Kernowfornia – also known as Cornwall. The sea and coastline have always been a part of his life, and today he lives on the foothills of Dartmoor, in Devon. In addition to his vibrant, mixed media illustration work, Lee is also likes to DJ and runs club arts nights in the Southwest of England. He loves to explore and experiment with a range of creative media, but drawing was his first love and that’s what drives him as an illustrator. Music, folklore and Latin culture are major sources of inspiration for Lee, in particular the striking imagery surrounding Dia de los Muertos. Lee's recent work has included commissions from world re-nowned establishments such as The Lincoln centre of performing arts in New York, the RHS society, Readers Digest, several big editorials, festival artworks and posters word wide."