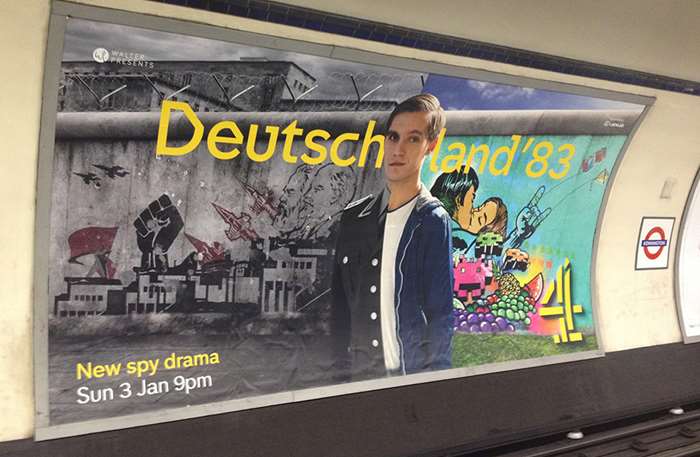 INSIDE OUT: The Deutschland 83 Promo Poster

We go behind the scenes as illustrator Chris Ede works with 4creative to produce stunning 80s street art.

Translated crime shows have been a hit on BBC4, and with its Walter Presents series, Channel 4 is introducing audiences to even more interesting and exotic programmes from around the world. First on the roster is Deutschland 83, an eight-part German spy drama that sees a young East German border guard recruited by the Stasi to spy on the West’s nuclear weapons programme.

The first episode aired at the beginning of January, and Channel 4’s in house agency 4creative rolled out a campaign including page advertising, banners, bus sides and more. “The show is fantastic, but it could be perceived as an inaccessible German drama,” says Pablo Gonzalez de la Pena, who was creative director at C4. “We managed to design a broader, mainstream piece that hopefully will open Deutschland 83 to all kind of audiences.”

The concept for the promos was simple – photos of East German spy Martin Rauch, played by Jonas Ney, comped together. One half is his militarised East German persona, and in the other half he’s a looser, Westernised version of himself. Behind the actor, a mural juxtaposing the freedom of capitalism and the control of communism. C4 needed a versatile illustrator to pull off the right imagery to tight six-day schedule, and turned to Chris Ede.

"I had to approach this project in a different way to my usual work,"says Chris. "The task was to create something more accidental and naive, as if created by the hands of people in that era with an untrained eye. Holding back from my polished skills of complicated compositions and layering was the biggest challenge, I think."

Chris worked up a number of sketches using pen, ink, spray paint, pastels and Photoshop, and Pablo and his colleagues Richard Biggs and Jolyon White at 4creative would comp up the designs, tweak and change them and offer feedback. The photography and graphic design were done in-house at 4creative, with Chris refining the imagery for the street art-style background mural, which really captures the programme’s main themes.

"There was a constant back and forth, juggling around the different elements and graphics to represent both worlds as best as we could," says creative director Pablo. "The main issue was to balance the right amount of graffiti in the wall so the poster could be seen and understood in the shortest amount of time."

And of course there were some happy accidents along the way. Once busts of Marx and Lenin were decided upon for the East German half of the mural, Chris and Pablo came up with the idea of having a couple making out on the Western side of the wall. This echoes some of the tension in the programme too, as Martin Rauch has love interests on both sides.

'Simplify, simplify, simplify,' was the mantra of much of the feedback, and Chris broke away from his usual slick and detailed compositional style. "On the East side it was a case of simplifying the over-complicated composition. I created a completely different style for the original 80s West artwork. This version was very stereotypical of the 80s and far too electronic based in content. The design was also way too slick. It was a hard habit to break but I got there in the end, with direction from Pablo," he says.

In the finished work, it’s the contrasting colour schemes that go to work first, there’s a nice roughness to the textures that makes it feel realistic, and the images within the mural quickly convey what Deutschland 83 is about at a glance. However, Pablo and Chris are also pleased with the little touches you can enjoy on second inspection. "Look at the space invaders as they turn into scary missiles," concludes Pablo. "It’s enjoyable to search for these small details and they show the love we put into our work."