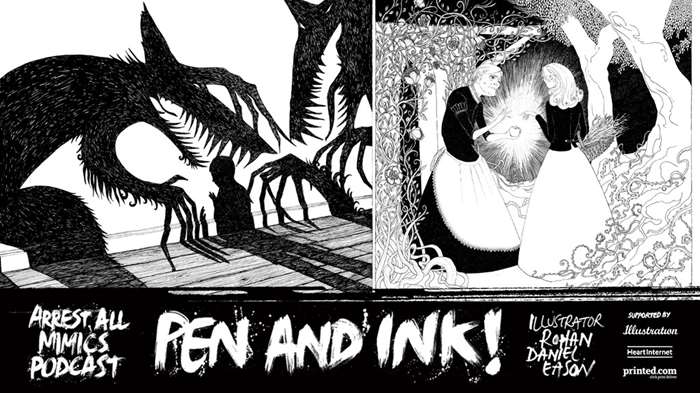 Rohan Eason; a master of the black & white line, chats to Ben Tallon about his journey with creativity.

Rohan Daniel Eason's stark black and white, pen and ink illustrations are rooted in the more traditional style of organic illustration. Often found in beautiful books with a dash of fantasy, they inspire freedom of imagination and transportation to a faraway land. But Rohan's real-life story is far more intriguing and inspiring than that. Taking the long road, his musical exploits, not without success, led him back to his childhood pleasure of drawing.

He takes us through that tale, including school artworks sold to peers, open-minded parents not questioning subversive pieces including three girls sat on toilets and a less than conventional method of getting his place at Kingston University.

Rohan's tale is hilarious, a great lesson to people who feel like they're existing down the rabbit hole in this confusing and often challenging creative industry.

We take a look at Rohan's work for Unicef, creating animations for a recent campaign to raise awareness of the plight of child refugees, his illustrations for My First Kafka and discuss how personal work can be the key to not becoming typecast and personal creative development.