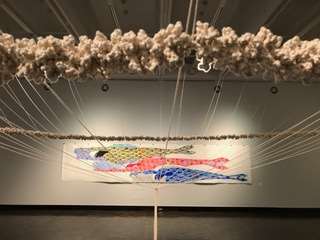 Andrew Selby is proud to be exhibiting his conceptual artwork at the Joshibi Art Museum.

From now until the end of August you can see Andrew's visionary illustrations at the Joshibi Art Museum in Tokyo, Japan as part of the Olympics and Culture: Tracings, Projections and Intersections exhibition, supported by the Tokyo 2020 Cultural Olympiad.

Andrew has several exhibits in the show, including this 5 metre Koinobori illustration depicting a family of competitive swimmers.

On another note Andrew tells us he has also just signed a contract to write the book Editorial Illustration for Bloomsbury, to be published in 2020.....we'll keep you updated upon its release.