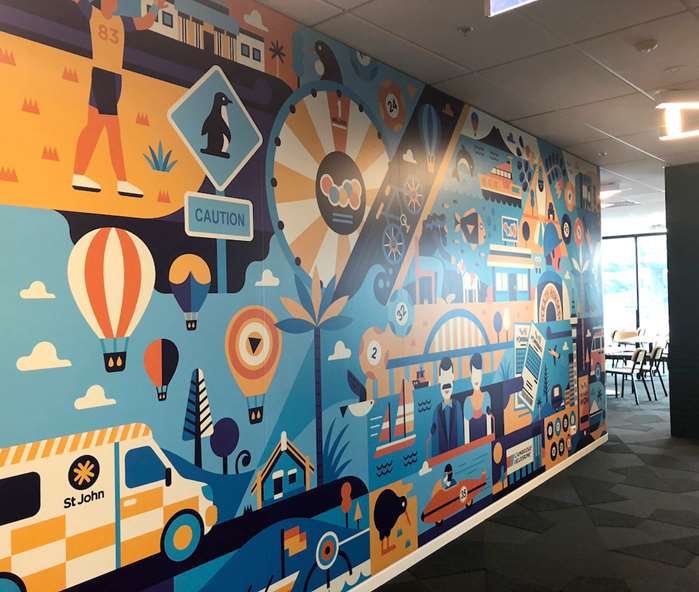 Lotto NZ have a brand new mural in their head office, created by the lovely Greg Straight

This eye-catching 8 meter long mural by Greg Straight was recently unveiled at the head offices of Lotto NZ, Greg tells us a bit more about how the project came about and his working progress.

"After creating the artwork for an Instant Kiwi scratch card for Our Backyard for Lotto, which was subsequently made into an online game, Toby also mentioned the offices were due a big spruce up soshortly after the completion of the Our Backyard artwork I was asked to create an 8 meter mural for the revamp!

I was given a list of what to include – different charities, sports people, NZ films and some classic Lotto imagery from years gone by – Get a perm!

Once I was happy with the layout I sent this to Lotto for approval and once I had the green light jumped on the computer to work the mural up digitally in illustrator at 50% of the full scale.

Again starting with the individual elements first, I tried to keep everything quite simple, stylised and geometric true to my style.

When I had completed all the different elements I placed my sketch on a layer in illustrator and started dropping in the individual elements until I was happy with the general look and feel and it felt balanced. Busy but balanced!

My favourite part of the mural is the guy with the beard and the dog with the winning ticket and the Auckland Zoo part, I also love the Get A Perm dude.

The Lotto balls at the bottom of the artwork are the winning balls that won 33 million.

My biggest challenge was fitting everything in and making the artwork look busy but still make sense. So each smaller part merged into the next part."