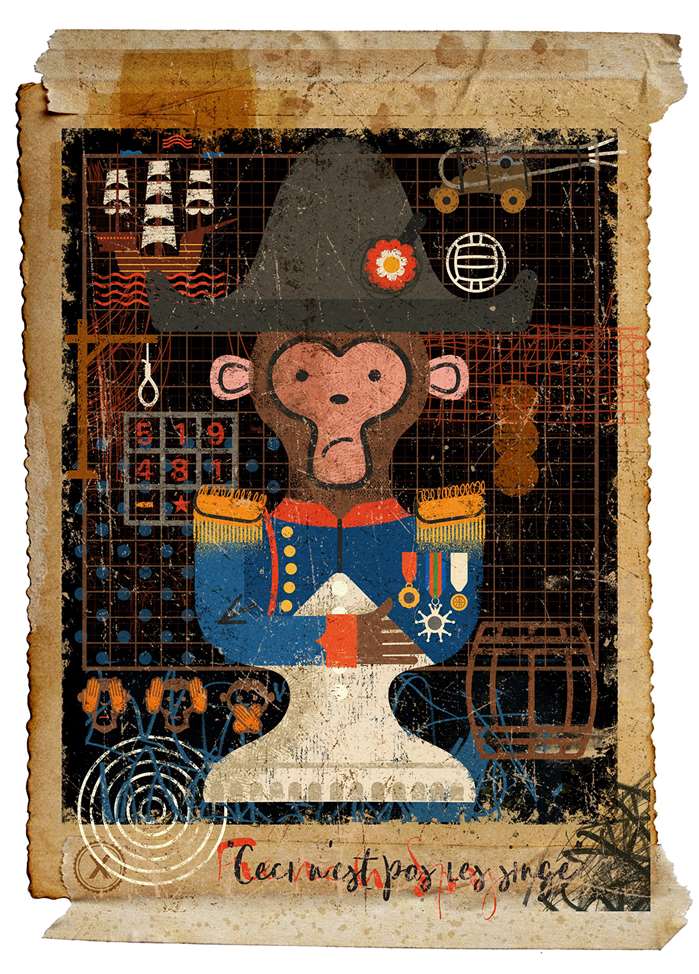 Ian Murray is thrilled to have his piece 'Ceci N'est Pas Un Singe’ shortlisted in the Northern Illustration Prize.

Ian's compelling artwork was entered in the 'established' illustrators category and responds to the theme Monkey while referencing the story of the Hartlepool Monkey. He explains the different elements of his illustration, "The monkey character is shown in a classic Napoleon pose and uniform as a kind of bust on a plinth. ‘Ceci N'est Pas Un Singe’, (This Is Not A Monkey) is scrawled underneath making reference to the famous Magritte painting, 'The Treachery of Images' and the idea that the victim of the lynching may well have been a young boy, a ‘powder monkey’, not a primate - hence the visual references to the ship, cannon and keg of gun powder. French Spy is written underneath this as the people who tried the monkey thought he was spying on them for the French government. I couldn't help but make some connections between the story and our country's current relations with Europe, the animosity some of us still have towards Europeans and our fear of the other. The figures in the guided box represent the voting patterns on the Brexit referendum and the minus & star symbols show that there will be one less country in the EU soon. The three wise monkeys which symbolise "see no evil, hear no evil, speak no evil", are there to invite us not the look the other way when an injustice is done and maybe to learn from our mistakes. Lastly the football shows that the legend of the Hartlepool Monkey lives on in sports such as rugby and soccer. More information on the prize here.