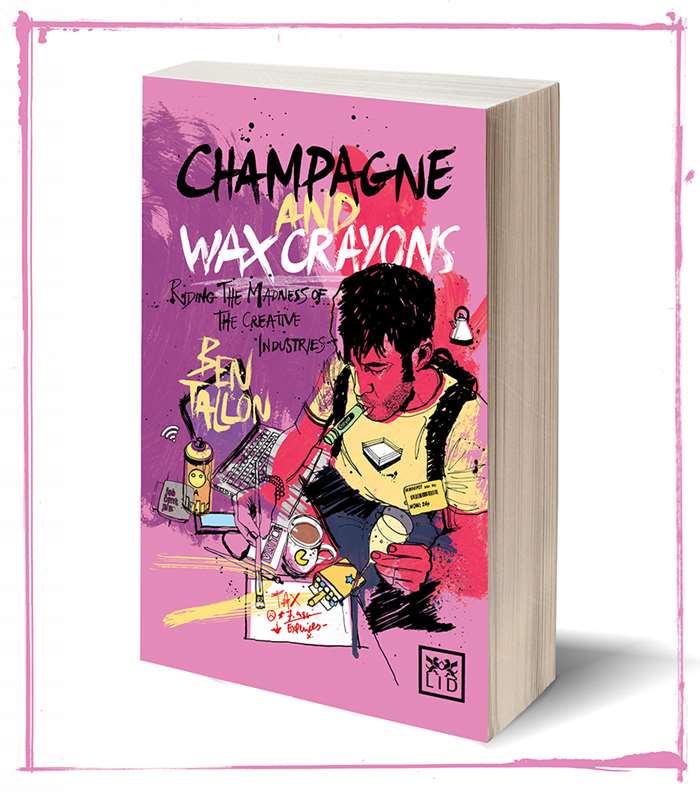 'Champagne and Wax Crayons: Riding the Madness of Creative Freelancing' is the debut book by Illustrator, art-director and designer Ben Tallon.

Due out this Spring, the book is a deeply personal account of starting and surviving as a freelance creative in the arts and learning many lessons along the way. The book covers the journey from graduating from university, setting up a business, to dealing with extreme quiet spells and eventually winning his dream client, WWE.   Ben says "I wanted to write something that picked up where the more instructional books left off. I read Lawrence Zeegan’s Fundamentals of Illustration as advised by my tutors whilst preparing to leave university and it was a big help. It's a great document. But I found very little in the way of answers, or any resources when I hit a brick wall, getting two replies from 100 introductory emails to prospective clients and no work for the first few months. It was only years later, that I realised that it is impossible to teach something like that, because it's such a personal experience. Everyone deals with adversity and triumph in their own way. I set up a blog in 2011 when I hit a six-week spell without work and almost ended up back on benefits after a two year purple patch. I was angry and downhearted and let off some steam through my words. Although it was a very angry rant, I was surprised when many other freelancers got in touch to share their thoughts on my writing, along with their own highs and lows. I really enjoyed chronicling this stuff, so I decided to try my hand writing a book about my experiences. Instead of trying to instruct or advise, I opted to tell my own story in detail. It's not an ego-trip, just a realisation that all those days working at home, sweeping up or popping on a wash load when you should be marketing or the lack of motivation at times… they’re common problems. It's just that the graphic designer down the street might be watching Sky Sports News instead of sweeping up. Everyone in the arts has their own peaks, troughs and inspirations, but there are common truths that emerge from any one story. So I think this book has a place. We all find it a little bit easier when we hear about someone else's story behind the portfolio, or the intimidating client list. The way I ended up working for WWE and Leeds United is completely personal and unique to me, but the stories and laws of the creative world will resonate with other people. It's more about maximizing all those individual quirks and obsessions to find your calling in the arts."