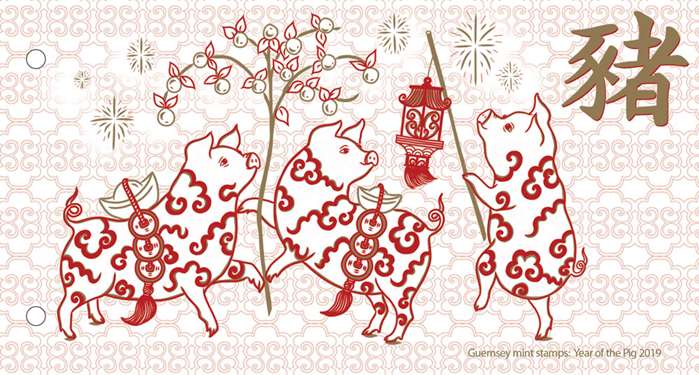 Created by Sydney-based illustrator Chrissy, each of the six stamps reflects the pig’s cultural association with an abundance of wealth and prosperity, with the Chinese symbol for pig depicted in gold on each stamp. Chrissy explains the different designs, "The Lucky Charm pig (46p stamp) wears a Chinese New Year lucky charm of coins commonly used as decorations during the celebrations. Its body is covered with a decorative scroll pattern inspired by Chinese ceramics. Strolling into Life pig (62p stamp) wears the longevity knot, which is also often seen during Chinese New Year celebrations. The cloud pattern is a symbol of peace and good fortune. The pig Leaping into Fortune (63p stamp) wears a cabbage ‘cai’ or ‘xai’, which is often used as a symbol of prosperity and wealth. The chrysanthemum design symbolises longevity whilst the fire pattern represents intellectual brilliance. The body of the Fortune Sticks pig (76p stamp) is covered in gold ingots and coins to symbolise wealth and prosperity, whilst the Fruits of our Labour pigs (85p stamp) are decorated with kumquats, tangerines and oranges, which are considered lucky during Chinese New Year. Completing the set are The Three Pigs (94p stamp) with a peony pattern on their bodies to symbolise wealth and achievement in life. The red packets are filled with money, which are traditionally given out during Chinese New Year." Bridget Yabsley, head of philatelic at Guernsey Post said: - “Taking inspiration from the Chinese zodiac, illustrator Chrissy Lau has created another striking yet intricate set of stamps for our Lunar New Year series. The use of red symbolises good fortune and joy and is often used in celebrations, whilst gold represents wealth and prosperity for added impact.”