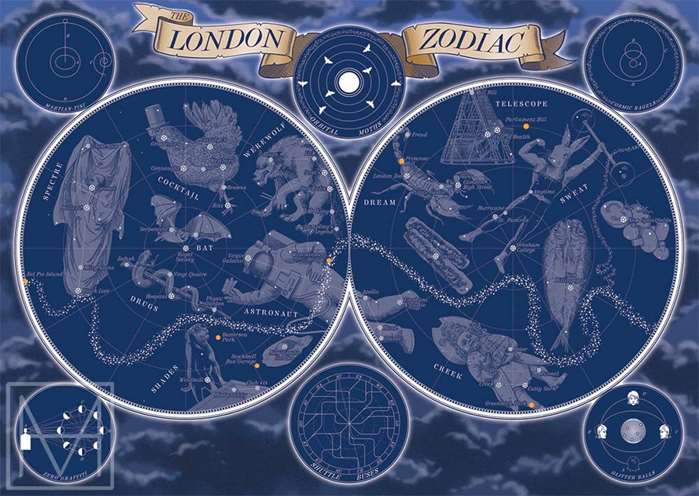 Mike Hall is a contributing illustrator to 'Curiocity: In Pursuit of London'. 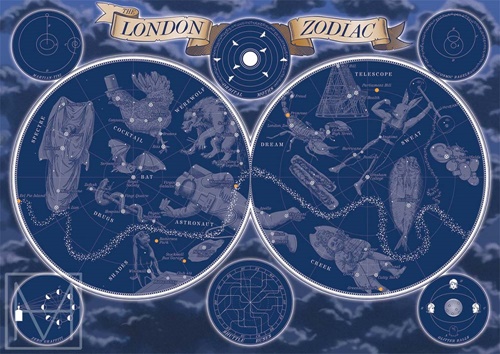 Image 1The book written by Henry Eliot and Matt Lloyd-Rose is a compendium of trivia and stories about London and includes contributions by various writers including Monica Ali, Philip Pullman and Robert MacFarlane. Arranged into 26 alphabetical chapters, each one features a stylised centrepiece map and accompanying illustrations by a different artist. Mike's piece for the commission is a map and illustrations for chapter N for 'Nocturne'; all about London at night. Mike says "My map is titled The London Zodiac and is an abstract representation of London in the style of a traditional star map....Each "constellation" is a grouping of locations, shown as stars, linked by a particular theme and illustrated with a zodiac-style character or object. The text in the chapter explains the significance of each constellation and each location is described in sequence like a walking tour. For example 'Spectre' shows supposedly haunted places around west London, 'Cockerel' shows hotels of Mayfair, and 'Werewolf' shows late-opening bars and restaurants of Soho." The book, published by Penguin is in reciept of many favourable reviews and is available now, via Penguin. More information here.