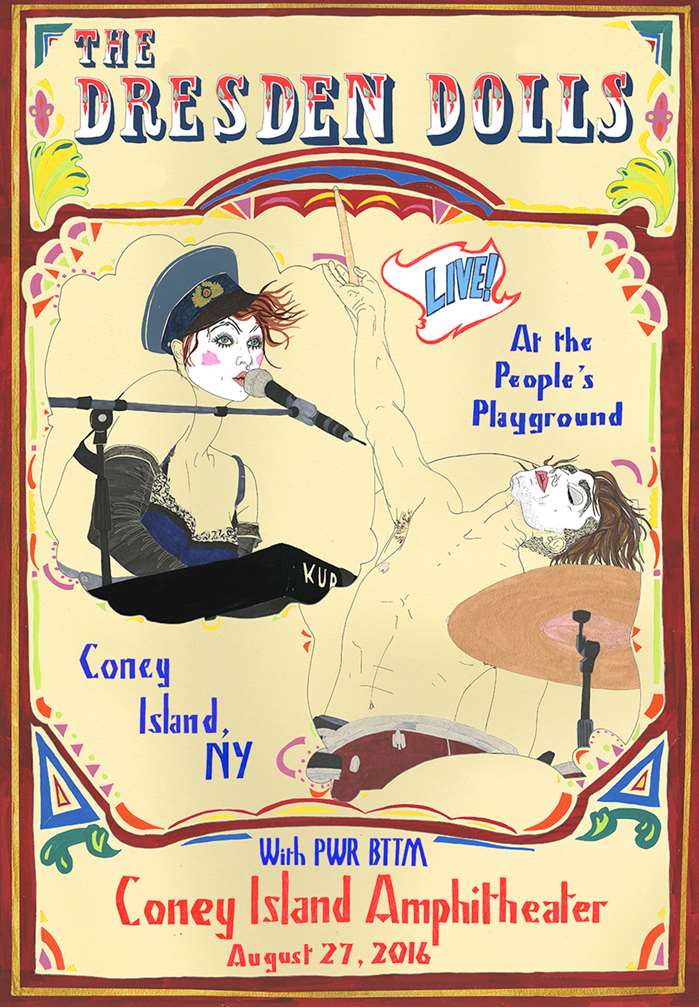 INSIDE OUT: The Dresden Dolls at Coney Island

A peek behind the scenes as Sarah Beetson designs a poster promoting The Dresden Dolls’ NYC summer gig.

Briefs don’t get much more inspiring than this for Australia-based British artist Sarah Beetson. The Dresden Dolls are one of her favourite bands. Coney Island, New York, is probably the most inspiring place on the planet as far as she’s concerned. And for their 27 August concert in the Ford Amphitheater at Coney Island Boardwalk, the band commissioned Sarah Beetson to create the promo poster.

The Dresden Dolls have a ‘punk cabaret’ sound which attracted Sarah to them over a decade ago. Amanda Palmer plays piano, Brian Viglione is on drums, and they play on stage in white, mime-like makeup. Brian is usually stripped to the waist and wearing a bowler hat while Amanda wears black and white striped stockings and vintage underwear. "Their colour palette is somewhat darker than mine, so I was drawn to the challenge of capturing their look with my style," says Sarah, whose work is always full of colour.

Sarah has worked with The Dresden Dolls before, and the brief for the poster developed out of discussions with the band. "The initial concept Amanda and I discussed was to go for a classic Victorian-era circus and sideshow inspired look, so I began with a decorative border and frames to mount the portraits of the band members," says Sarah. "Coney Island has such a bright, colourful aesthetic, it was nice to find a middle ground between this and still be in-keeping with The Dresden Dolls’ look."

Another challenge early on was finding reference material to sketch from. The band hasn’t played together very often for a number of years and the photos Sarah managed to find online didn’t offer fantastic resolution or detail. She found plenty of Amanda, who performs in a similar outfit solo, but Brian dresses differently for his other projects so it took her a bit longer to do his image justice.

This is reflected in the sketches Sarah did as the project progressed, as well as the feedback she received from the band. The image of Amanda was nailed down early on, but after queries about how Brian was depicted he sent over a photo. Working from that, Sarah placed him in the poster striking a dramatic pose surrounded by his drum kit. “Awesome! Nailed it!” Brian wrote back. “The only small change I would like to make is to erase our individual names. The space is nice. Keep it clean, less clutter.”

Removing text from an image is a request most illustrators like to receive, and the changes were easy to accommodate. Sarah creates every element of a piece by hand – the colours, backgrounds, paint, splatter, collage, drawings and text. She scans them in and keeps them on separate layers in Photoshop. Each can then be adjusted or removed and replaced quite easily. It’s rather different to how she created her first Dresden Dolls poster back in 2005, with the band rendered in one painting on wood, and the type set using decaying 1970s Letraset transferred to the board.

There was also feedback on this project from an unexpected though highly respected source. The author and comic book genius Neil Gaiman is Amanda Palmer’s husband. "He took a look early in the rough phase and suggested I thicken up the line work so it didn't start to get lost with the addition of colour. This was great advice and I think really shaped the finished look of the poster. I had a really good time researching vintage carnival and fairground posters too and looked at Victorian Britain's travelling fairs and artwork for ideas," says Sarah.

As we bring you this story, Sarah is in New York preparing for the gig. Having worked as an artist in residence at Coney Island in the past, and with a personal project dedicated to the place, she’ll enjoy seeing the band in the Amphitheater. The building used to be Child’s Restaurant and its famous mosaics of Poseidon were restored along with the rest of the building when it was converted into a venue recently.

Sarah is really pleased with the poster too, as are the band who said: Thank you! So awesome! And thank you for spending the extra time on Brian. It was worth it."