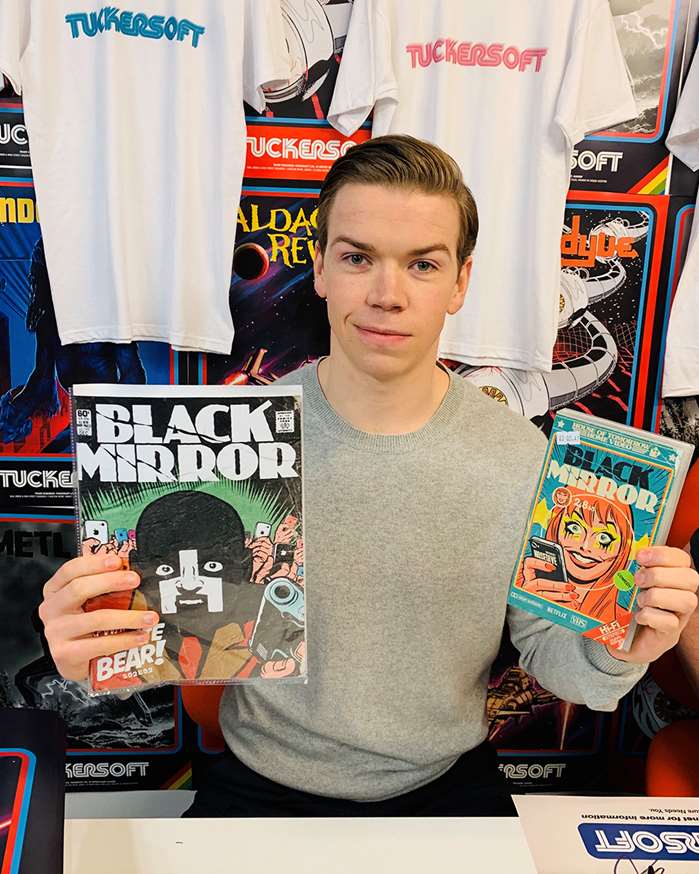 INSIDE OUT: Butcher Billy and the Black Mirror comic

With Black Mirror: Bandersnatch the talk of the internet, illustrator Butcher Billy has seen his comic-style imagery incorporated into the film’s UK promo campaign by Netflix.

If you love something, draw it. That’s surely the advice you’d receive from the Brazilian illustrator Butcher Billy. You never know where it might lead. After creating his own fictitious comic book covers based on episodes of Black Mirror, the artist has found himself collaborating with the show and its maker Netflix in a number of exciting ways. 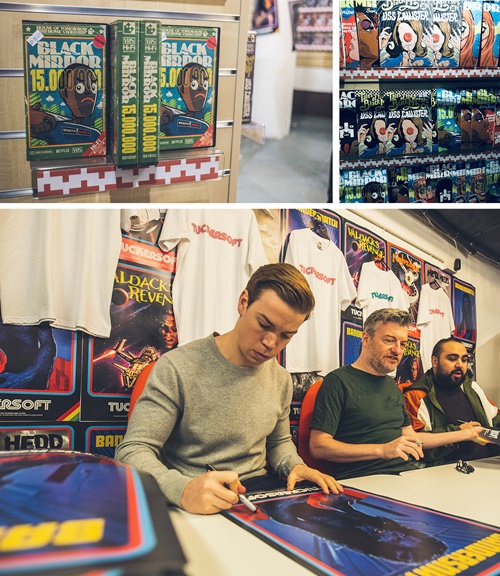 The shops hosted signing events with actors and producers from Bandersnatch – (left to right) Will Poulter, Charlie Brooker and Asim Chaudhry.

The latest venture to employ Butcher Billy’s artwork is a pair of pop-up shops set up to promote Black Mirror: Bandersnatch, the interactive movie that began streaming on Netflix on 28 December. The film is set in 1984, and tells the story of a young video game developer who gets too close to the game he’s designing, the ideas he’s playing with and the technology involved. The pop-up shops reflect this, and although you can’t go inside them, passers by can see posters, videogame and VHS tape packaging inside that reflect a true 80s vibe. Among the artworks used are the same Black Mirror-inspired comic book covers Butcher Billy drew and shared online a few years ago.

“The general idea was to make it look like each episode of Black Mirror was actually based on a fictitious comic book from the 60s or 70s, complete with the Comic Code Authority seal and everything else. Since every episode has a different tone, I took the opportunity to explore distinct comic book styles like romance, horror, mystery and sci-fi,” says Butcher Billy. 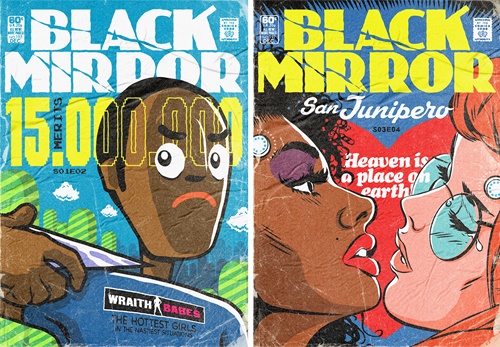 The covers Butcher Billy created were spotted on social media by Charlie Brooker, one of the creators of Black Mirror. He invited the artist to contribute to the production design process for season four, which began airing in December 2017. In the episode Black Museum viewers can see posters, game artwork and comics Billy illustrated. Since then, he has worked on several related projects with Black Mirror and Netflix.

In fact, he’s helped create some highly desirable merchandise for fans including vinyl LP covers, which have been released for individual episodes of the programme. The soundtracks to Arkangel, San Junipero and Black Museum have all featured Butcher Billy’s artwork, which mixes iconography from the show itself with some of his own inventiveness.

Now, Netflix has called on Butcher Billy to turn his original comic book covers into VHS packaging, to appear on the shelves of Tucker’s Newsagents, a fictitious shop that has popped up in Old Street, London and at Grand Central in Birmingham.

“Black Mirror fans love Easter eggs and we wanted to create experiences through the pop-up stores that played into this narrative,” explains James Honess, UK and Ireland marketing manager for Netflix. “Billy’s artwork fit the bill perfectly, with subtle nods to the Black Mirror universe without being overtly brand-heavy.”

It’s all down to the style 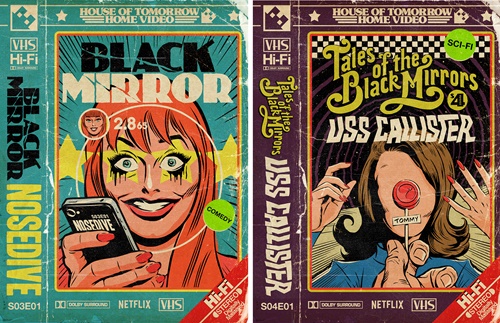 Butcher Billy’s creative style – a bold version of Pop Art that feeds off the culture of the 60s, 70s and 80s – resonates with that of Black Mirror, which itself is an anthology show inspired by today’s technology as well as earlier programmes like The Twilight Zone and Tales of the Unexpected. And Butcher Billy’s way of thinking seems equally in tune with that of executive producers Charlie Brooker and Annabel Jones.

“I love to bring different visual and cultural ideas together and juxtapose them in different ways. Sometimes that twists their meaning and, like Black Mirror, it can reflect something new, ambiguous and even quite dark,” says Butcher Billy.

Having said that, the faux comic book covers appearing in the pop-up shops use strong bursts of colour and exaggerate the drama. There are avatars of characters in the show, visualisations of the technology used and references to the music and lyrics. “I thought it was interesting to clash old and contemporary by using a vintage drawing style while keeping the technology of the episodes,” he explains. “The Watchmen was an influence, and the founding fathers of comics in general like Jack Kirby, Steve Ditko, Sal Buscema, John Romita Sr and Stan Lee.”

Little touches created in Photoshop add to the authentic feel of the covers. Aged paper textures, half-tone ink patterns, little tears and folds, and a bit of distressing make them look like they’ve been read many times and kept in a box in the attic. None of the comics is based on Bandersnatch, but their relationship to the Black Mirror mythology adds to the retrospective aura generated by the pop-up shops, active 3 to 14 January, 2019.