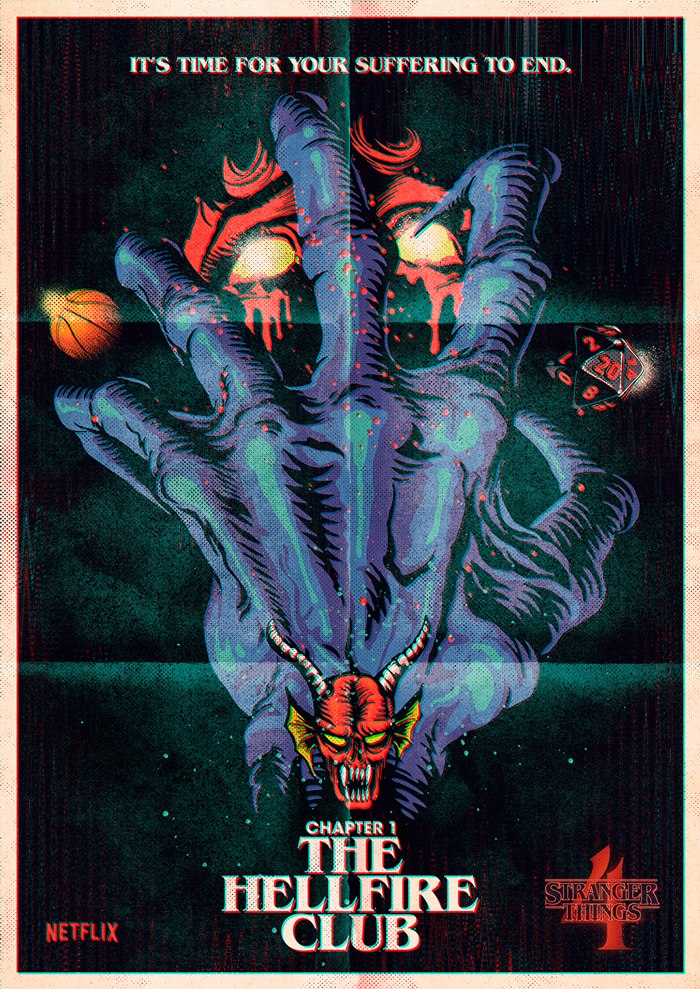 The Brazilian Pop Art illustrator Butcher Billy has created a series of posters for the Netflix production Stranger Things 4 which have captivated audiences and become a worldwide phenomenon on social media, and beyond.

The nine artworks – one for each episode of Stranger Things season four – chime with the show’s avowed 1980s vibe, playing on the aesthetics of old comics, horror novel jackets and movie posters. Designed specifically for the Stranger Things social media campaign, the artworks tap into the dark fantasy aspect of the story, offering fans a sinister alternative to the standard promo posters, which typically feature group shots of the characters.

“They’re not the usual art that is made for a series. These play with the iconography, symbols and specific elements of the show, focusing more on the gory and scary scenes without giving away too much of what happens. Overall, they are teasers for each chapter,” said Butcher Billy.

Released one at a time building up to the release of episodes one to seven on 27 May, and episodes nine and ten on 1 July, the posters have stirred excitement in Stranger Things fans around the world. They have been liked tens of millions of times on the Stranger Things Instagram account alone, with hundreds of millions of views across the show’s social media platforms.

Although originally intended for social media consumption, the artworks have now been released as merchandise including posters, t-shirts, sweatshirts and hoodies in a Butcher Billy collection on the Netflix online shop. Netflix has repurposed the imagery for outdoor advertising across Los Angeles. 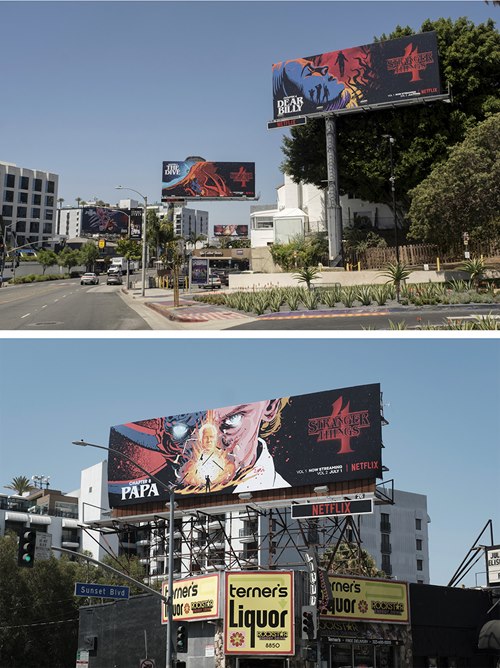 “They asked me to adapt every piece to horizontal versions. It was a last-minute thing, and I wasn’t sure about it at first as it was a very different canvas, but in the end they have turned out as well as, if not better than, the originals. It was thrilling to see them in physical form spread all over LA,” said Butcher Billy.

The project began in February 2022 when Netflix’s social media strategy agency Ralph contacted Butcher Billy and IllustrationX about work on an upcoming, well-known sci-fi series, saying the artist would be a perfect fit.

“When I found out that it was Stranger Things, and that the Duffer Brothers had loved my previous work and were the ones who actually suggested my name, I was so stoked to say the least,” said Butcher Billy.

Supplied with early screenings of the episodes, Butcher Billy was free to choose the ideas he thought would work best and to select memorable, impactful quotes from the dialogue. Going for a look and feel that hinted at 1980s video nasties, horror movie posters and Stephen King book covers, he started sketching his ideas by hand. The compositions were then developed to perfection in Adobe Illustrator TM and Photoshop TM.

“I decided to design each piece in a way that didn’t use much of an actor’s likeness unless it was strictly necessary. I would say that the two which actually do feature a character’s face were a bit more challenging, with more revisions needed to make sure everyone was happy,” said Butcher Billy.

With his strong, graphic style and heavily influenced by 80s comics, music, movies and computer games, Butcher Billy proved to be the ideal illustrator for the project. In 2017, he made his interest in Stranger Things known by creating a series of book covers entitled Strange tales – a personal project inspired by season two of the show.

He has also worked with Netflix in the past creating imagery based on Queen’s Gambit and Cobra Kai, as well as a series of Black Mirror-based comic and VHS covers.

“It does seem like an ideal combo. I remember when Stranger Things first came out. It absolutely ticked the boxes for me so finding out that the Duffers were fans and wanted me to have a go in their playground felt like everything coming full circle. I’m overwhelmed with the attention. People love the pieces and have been sharing them everywhere. I’ve been getting hundreds of comments, direct messages and emails with compliments,” said Butcher Billy.