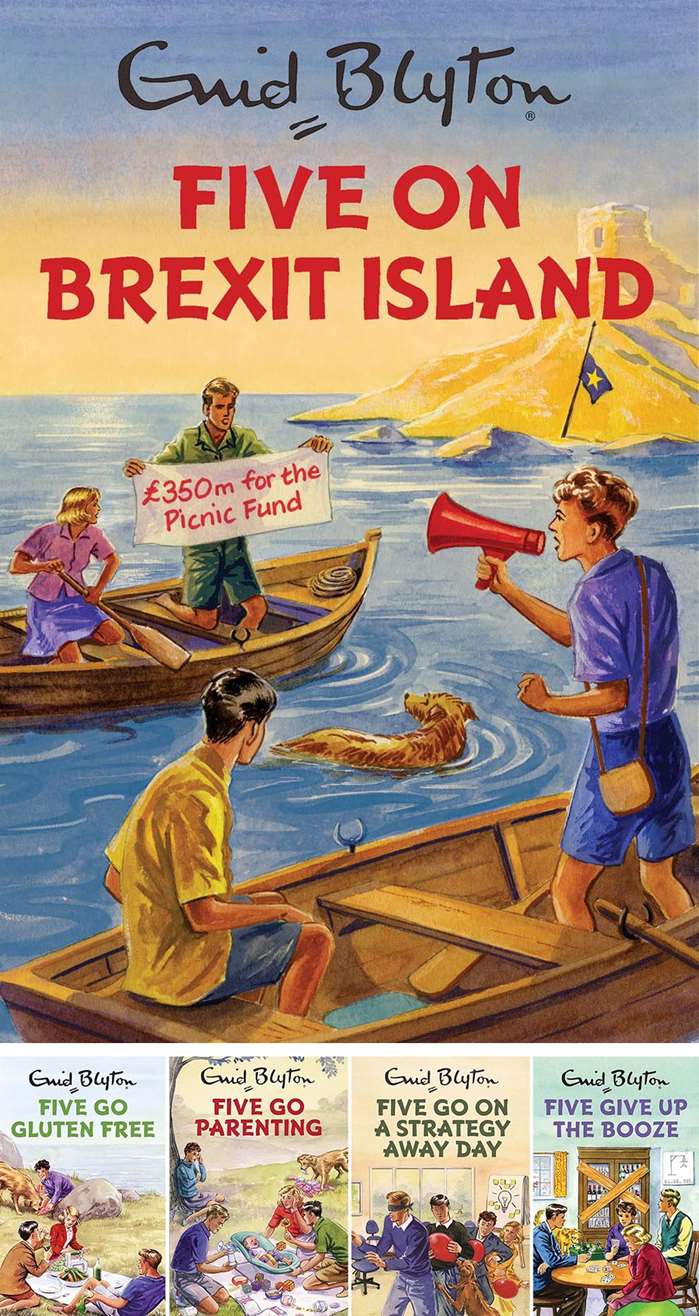 INSIDE OUT: Enid Blyton for Grown-ups

How Ruth Palmer illustrated five fresh covers depicting the Famous Five as adults, for the new series of books by Bruno Vincent

One of the charming things about the Famous Five was that they never grew up. From Five on a Treasure Island in 1942 through to Five Are Together Again in 1963, they existed in a time warp of endless holidays, adventures and - according to the 1982 TV movie - lashings of ginger beer.

Now, thanks to author Bruno Vincent, the Famous Five have grown up. Julian, Anne, George, Dick and Timmy the dog face a whole new set of challenges in the Enid Blyton for Grown Ups series, published by Quercus. The titles themselves are grabbing enough, including Five on Brexit Island, Five Go Parenting, Five Give Up the Booze, Five Go Gluten Free and even Five Go On a Strategy Away Day. But the gentle parody, as traditional adventure weaves together with first world problem, wouldn’t be complete without cover illustrations capturing the authentic look and feel of an Enid Blyton book.

Enter Ruth Palmer, commissioned by Quercus to paint the covers. "I read all the Famous Five books as a child and absolutely loved them," says the illustrator. "The drawings are so lively and loose, but well drawn. So I was very excited when Quercus wanted me to create a style in-keeping with the original illustrations by Eileen A Soper. The idea is that people will do a double-take, at first thinking it is an original, and feel nostalgic for the old stories and characters."

It was a fairly loose brief. The images needed to be in the original style, but subtly set in the present day. The characters needed to be identifiable, but there should be little clues and funny surprises in the pictures, like the spiraliser on Five Go Gluten Free.

Ruth was sent a series of scans of black and white interior illustrations from the original books. From these, she drew the characters in similar poses and began setting up the compositions. Naturally, the distinctive Enid Blyton signature would go across the top, but other than that the canvas was flexible. 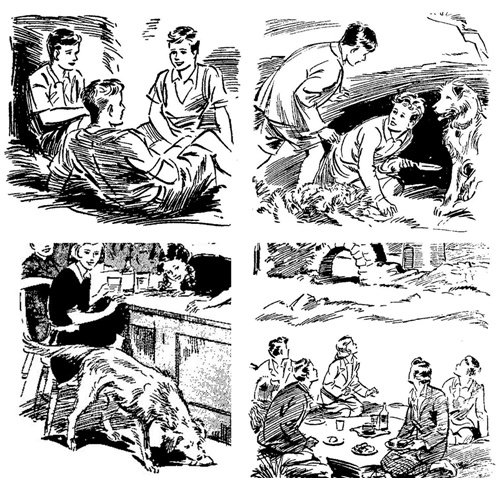 "The children's poses and expressions were full of life and atmosphere and they reminded me how exciting I found these books as a child. So I tried to use these drawings as the basis of my composition and played around in Photoshop to create a scene based upon the original drawings, changing heads and expressions and drawing in props where they fitted. I let the poses dictate the composition," says Ruth.

Each cover went through two or three versions as the layouts were tweaked, then Ruth would paint up the final artwork using gouache and watercolour, mimicking the colour palette of the children’s books. 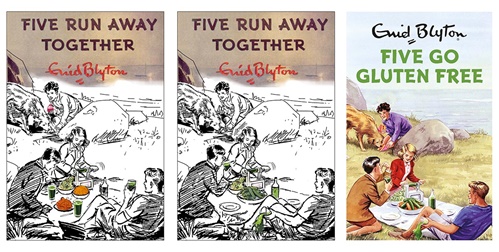 above - WIP with the final art

"The back and forth was all about making the covers as funny as possible, and giving each of the Five something to do which was humorous in its own right. Hence Dick holding his nose and Julian pouring away the green juice on the Five Go Gluten Free cover," says Richard Milner, publishing director for non-fiction at Quercus.

"The main consideration for the five covers when taken together was finalising complementary colours for the title lettering," says Richard. “We wanted each book to pick out a different colour from one of the Five’s clothing - or the courgette green in the case of Five Go Gluten Free."

And the end product? Well, if you knew the Famous Five as a child you really can’t help but do a double-take when you see the Enid Blyton for Grown Ups series. Since their release on 3 November, the books have received all kinds of media attention and been shared across Facebook and Twitter.

"At first glance I think they look like they could be original illustrations, helped of course by the typeface and author’s signature. I really enjoyed emulating Eileen A Soper’s illustration style. I have done a fair bit of this type of work and it is always very instructive. You really appreciate how good these illustrators were, and it forces you to go outside your comfort zone and experiment."

You can buy the books here.