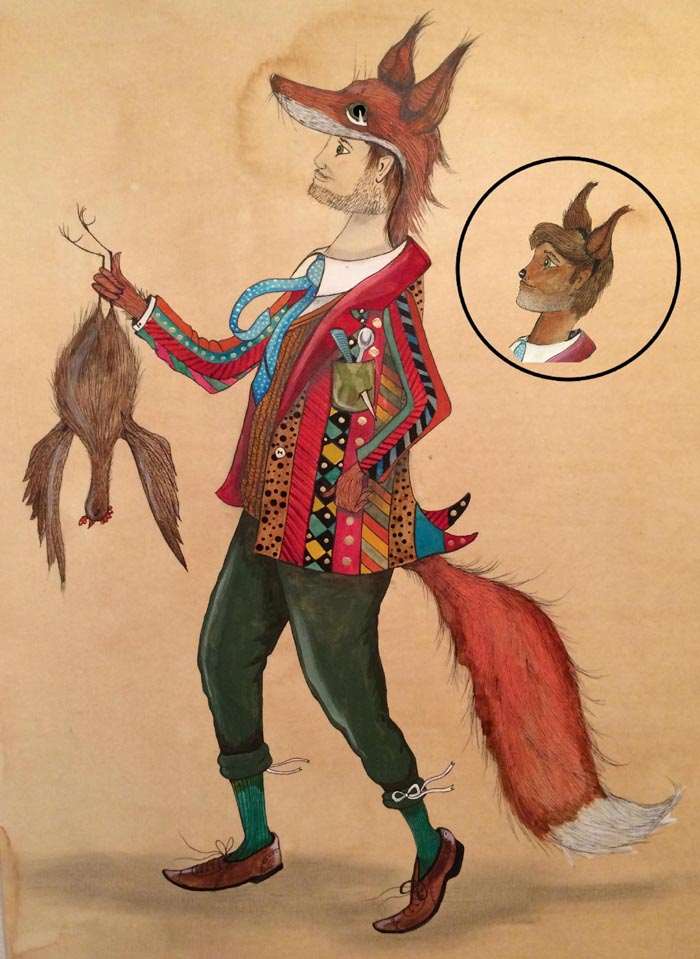 Fantastic Mr Fox at the Opera

Emily Carew Woodward designs the costumes and sets for an opera of Fantastic Mr. Fox at 'Opera San Antonio'.

Emily's work on this production has been a wonderful experience and she's recently back from the States where the show opened at the end of September. Here she describes the commission and her creations...

"I got a call one day at the end of last year 2013 from Donald Sturrock. Donald is the author of 'Story Teller. The Life of Roald Dahl' and also wrote the Libretto for the opera adaption of Fantastic Mr Fox, he is a good friend of the Dahl family. He asked me whether I'd be interested in redesigning Fantastic Mr Fox in opera, a job previously done by Gerald Scarfe in 1998. My work had been put forward by Dahl's grandson whom had spotted it at an exhibition previously . I was then asked to join Donald and Liccy Dahl for supper, over which we discussed the job and I accepted willingly the task of creating all the costumes and sets for the opera. I then proceeded with designing costumes appropriate for singers, taking into account that their eyes, ears, mouth and nose couldn't be restricted by any masks due to hearing notes and being able to sing without any restrictions.  Spending most of my childhood and adolescent years growing up on, or around farms meant that I have already had the pleasure of meeting real-life Boggis’, Bunce’s, Bean’s, Badgers and Fox’s on numerous occasions in the past. Being asked to recreate the visuals for Fantastic Mr. Fox was not only a subject in my vernacular but also a childhood dream come true. I approached recreating this staged version as if the book had been written yesterday; firstly I refreshed myself of the original story and then the Libretto adaption for the opera, noting down all the obvious character idiosyncrasies and major scene details. Using these notes as my starting block, I then avoided (as much as is realistically possible) looking at any previous artists work for this story, as I didn’t want my creations subconsciously being influenced by former artists work. Staying true to my own design was one of my main objectives; usually my compositions are quite colourful and detailed, I take huge enjoyment in the grotesque and the inevitable humour that comes with it. Creating Mr Fox’s costume was a sheer joy and I was thrilled at how all the other costumes fell into place once I had completed his last whisker. The costumes that were realised by the talented costume and set makers were excellent, and I was astonished at how note-perfect and true to my designs they have kept them".

Read more about the production and see some 'on stage' photos here.